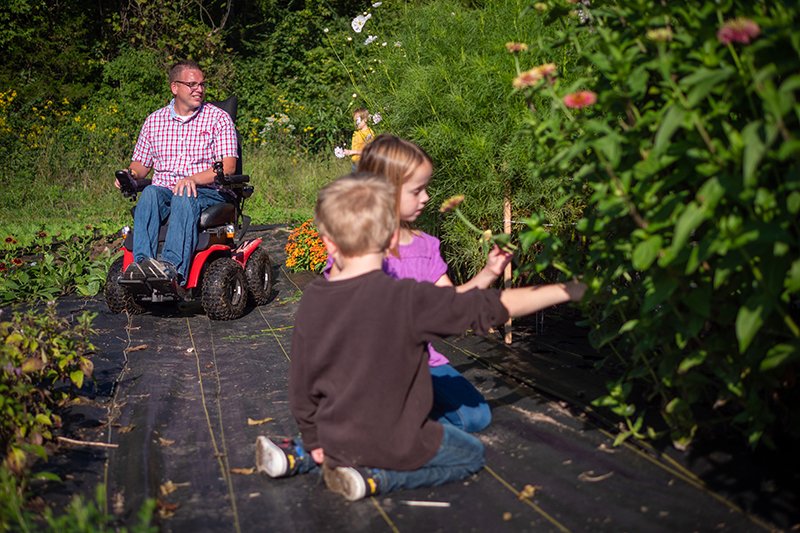 As people look for ways to live their values—by embracing slow food and slow fashion, for example—one local family is counting on people to apply that same mindset to their floral choices.

Eureka residents Jeremiah and Kristy DeGuire are the founders of Wheels 2 Fields Flower Farm, which they’ve run from their home since 2018. The company is named for Jeremiah, who’s been in a wheelchair since being injured by falling debris from a building during a storm. A former U.S. Marine, Jeremiah owns Veteran Supply Warehouse, an electrical distribution company. The farm, he says, gives him the opportunity to “do something to show what [can] be done” by someone in a wheelchair.

For Kristy, president of DG2 Design Landscape Architecture, nature has always been a source of comfort. After spending years toiling in her garden and giving away flowers to family and friends, she saw the potential for a business. “I’m a flower farmer on nights and weekends,” she says, reporting that she spends about 20 hours a week on farm business during the growing season.

From April through October, the couple cultivates sunflowers, tulips, garden roses, dahlias, zinnias, peonies, and more on 1 acre of their 3.5-acre property. Kristy turns those flowers into arrangements, foraging willow branches and other native plants from uncultivated parts of the property. Jeremiah maintains the farm’s drip irrigation system and makes some of the flower deliveries. They’re assisted by three seasonal employees, as well as their three children.

“I can be flexible with my schedule because I own both businesses,” says Kristy. “The rest of the time is spent with family.”

In the early days, the DeGuires sold flowers on the honor system from a cart at the end of their driveway. Today, they take online orders, make deliveries throughout the week, and provide flowers to be sold on Saturdays at local coffee shops. Twenty percent of the business is derived from the sale of blooms to other local floral designers.

Sustainability is important to both Kristy and Jeremiah, and they want to pass that way of life on to their children. When Kristy began to research flower businesses, she was surprised to learn that most fresh cut flowers available in the United States are grown overseas in warehouse conditions, often involving the use of excess plastic and harsh chemicals.

“Seventy to eighty percent of flowers in bouquets come from overseas,” says Kristy. “That’s something we’re trying to change as we teach [our clients] about buying flowers that are in season.” If a bride requests peonies for her October wedding, she says, “that’s not something we would provide. It would be cost-prohibitive to order peonies from overseas and doesn’t match our [mission] to use what’s available to lessen our carbon footprint.”

The philosophy is simple: provide fresh cut flowers that are safe, scented, and local. Kristy says it’s good for pollinators, the planet, the customers, and the local families dedicated to the slow flower movement. To strengthen ties with like-minded businesses, Kristy started the Missouri Grown Flowers Facebook group; it’s up to 88 members.

“There’s at least 10 of us [local flower farmers] in the St. Louis area,” she says, “and it’s so important to spread the message.”