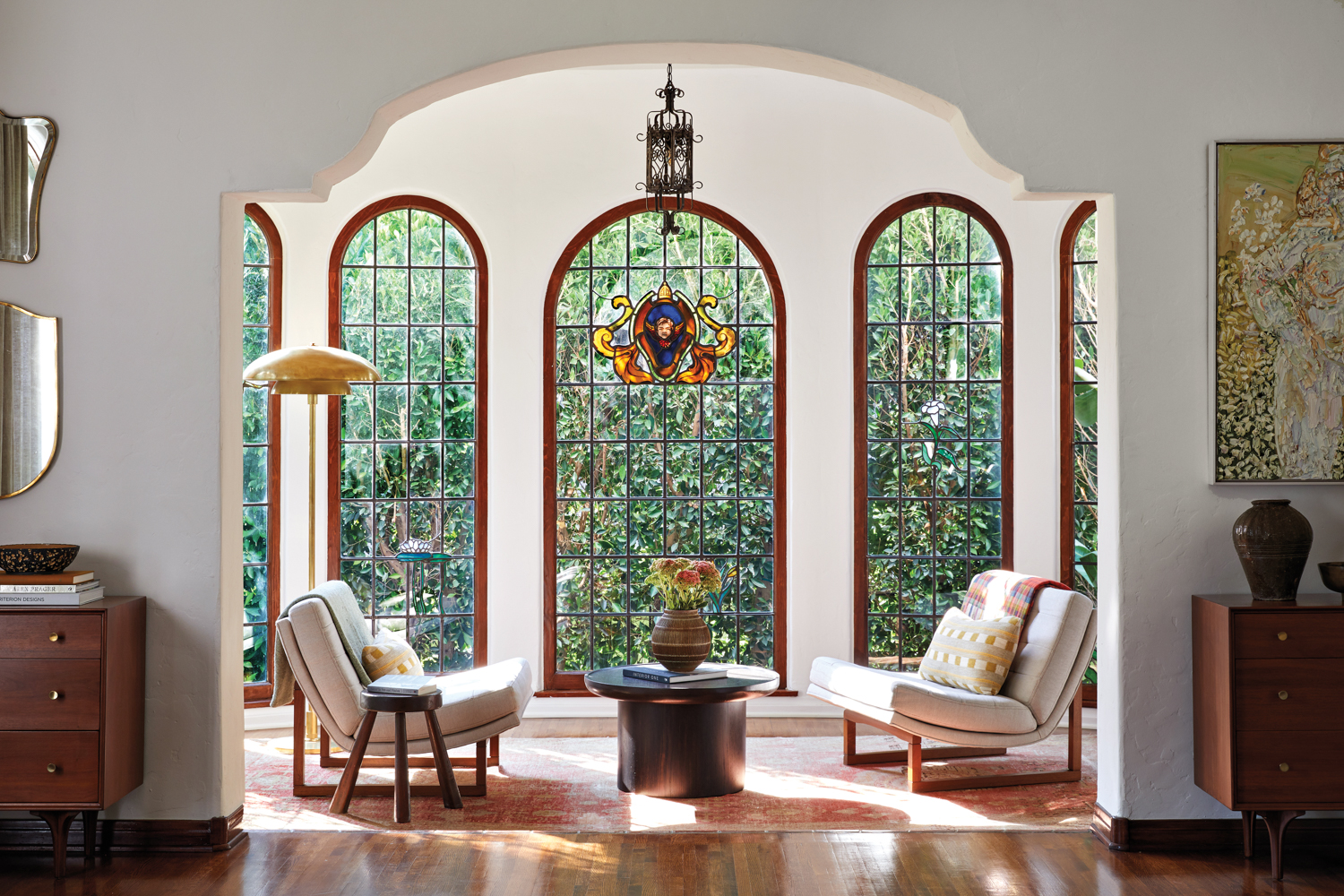 Much like the tantalizing story arc of a dramatic TV series, interiors designed by David John Dick and Krista Schrock tend not to reveal themselves all at once. So when a Hollywood couple approached them to infuse their first home with a collected and casual style, the designers were intrigued. The 1928 Spanish-style abode in Los Feliz had beautiful bones, but its fascinating homeowners were what really enticed them: Ross Duffer, co-creator of the hit Netflix series Stranger Things, and his wife, director and screenwriter Leigh Janiak, whose Fear Street trilogy wades into a similar nostalgia-horror pool. As the designers got started, so did the plot twists. “Ross and Leigh pushed us out of our own comfort zone in terms of using more colors, patterns and eclectic pieces than we typically would,” recalls Dick.

Since the house had been renovated by its previous owner, the project brief was strictly decor-based. To balance their clients’ desire for both a refuge from their busy professional lives and an appealing place to entertain friends and family, Dick and Schrock, co-founders and principals of Los Angeles-based Disc Interiors, combined contemporary, vintage and custom furnishings with the couple’s existing art collection to create a refined yet relaxed atmosphere. Anything deemed too fussy or precious was out. “That’s a common thread with our clients: To want a home that feels collected and put-together, but doesn’t seem overly decorated, ” explains Schrock.

One early find firmly established the tone of the home: a vintage sofa upholstered in a striking motif depicting insects and birds of prey amid a tangle of vines. Given a starring role in the spacious living room, it may not have been plucked off the set of Stranger Things but it nods to a fanciful world nonetheless. “It’s one of those unexpected and slightly weird moments that start conversations,” says Schrock. “ ‘Playful’ is a word our clients used a lot, and that sofa has a vibe that was important for them—to not be so serious.” She and Dick paired the marquee piece with large-scale bespoke furnishings, including a 12-foot sofa bound in burnished velvet and a sizable walnut coffee table, to anchor the room.

The designers applied this mix-and-match approach to the entire home, often letting a central piece lead the design. In the dining room, for instance, midcentury chairs by Paul McCobb sparked the space’s treatment, comprised of a simple white oak table, a muted Tabriz rug and a handcrafted hutch from Mexico. Overhead, in striking contrast to the room’s traditional architecture, hangs a contemporary Capiz shell pendant that offers a hint of Moroccan ambiance. “It’s as if the furnishings have been collected from different places over time, even though we did it in less than a year,” Dick notes of the design choices. That level of cohesive curation appealed to Ross and Leigh, explains Schrock. “We don’t piecemeal things,” she states. “We’re the kind of design firm that shows mood boards, fabrics, rugs, textures, wood tones—all at the same time—and they appreciated that since they deeply understand visuals themselves.”

Artwork, much of which the homeowners brought in from their former apartment, provided another pivotal cue for the designers. For the sunny breakfast room, Dick and Schrock, inspired by the vibrant hues of an artwork by Leanne Shapton, conceived an L-shaped banquette embroidered with a stripe that picks up the patterned dining chairs’ brick shades. “We didn’t go overboard with colors and prints,” says Schrock, “but we definitely used enough to make an impact.”

Layers of texture are on display in the primary bedroom, where a custom upholstered bed joins a verdant Carl Malmsten midcentury sofa with a sinuous back that echoes the curves of the closet’s arched opening. The designers toned down what formerly were bright white walls, opting for a more subtle taupe hue, a shade that reappears in patterned bed fabrics accented with navy. Dick and Schrock pushed the envelope further in the guest bedrooms, layering patterns and textiles, including a statement wallpaper of oversize Matilija poppies in one of them. “All the rooms in this house are really large, especially the bedrooms and the living room, so everything we did was meant to bring in warmth and coziness that the house was lacking,” says Schrock. Sculptural lamps, set in nearly every room, are another way the designers amped up the ambiance. “They’re like art pieces you can touch and use every day,” muses Dick.

The result is a residence that’s whimsical, warm and inviting—the antithesis of Stranger Things’ infamous shadowy “Upside Down” dimension. Comfortably ensconced in a space like this, who knows what inspiration might strike its visionary homeowners next?

The post Peek Inside The Whimsical Home Of The Co-Creator Of ‘Stranger Things’ appeared first on Luxe Interiors + Design.