Surrounded by 36 acres of historic parkland near the River Wansbeck, Meldon Park is a glorious country estate set in spectacular countryside. Penny Churchill takes a look.

For sale for the first time since it was completed in 1835, secluded, Grade II*-listed Meldon Park sits in 36 acres of historic wooded parkland overlooking an ancient deer park at the heart of the Cookson family’s 3,800-acre Meldon Park estate, six miles from the market town of Morpeth and 20 miles from Newcastle-upon-Tyne.

Andrew Black of Savills quotes a guide price of £3.5 million for the elegant Georgian house, built for Isaac Cookson, the younger son of a successful Newcastle banker, by the prolific northern architect John Dobson, with some internal alterations by Sir Edwin Lutyens in the 1930s. 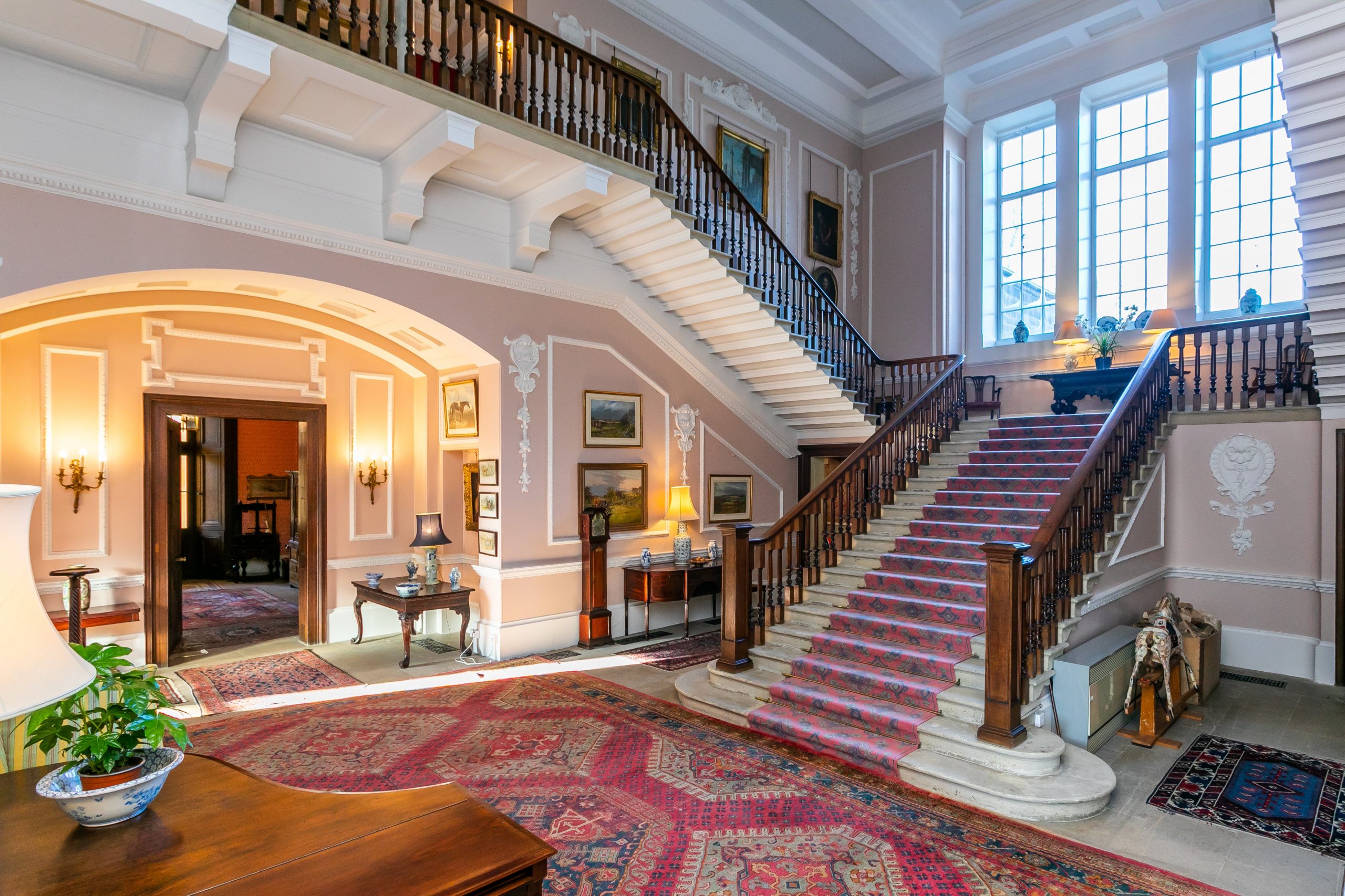 Best known for designing much of central Newcastle, Dobson was the pre-eminent architect of his day in the North-East of England, where he built or remodelled more than 60 churches and 30 country seats. According to his daughter, Dobson ‘never exceeded an estimate, and never had a dispute with a contractor’, a reputation that no doubt endeared him to the financiers, mill owners and industrialists of the region who commissioned him to build their grand new country houses.

Writing in Country Life (February 24, 1966), architectural historian Marc Girouard traces the history of the Meldon Park estate, from its ownership in the 14th century by a branch of the Heron family of Ford Castle until the early 17th century, when it was sold to Sir William Fenwick of Wallington.

It later passed by marriage to the Radclyffes, Earls of Derwentwater, whose vast estates were forfeited when the 3rd Earl was executed for his part in the Jacobite rebellion of 1715. 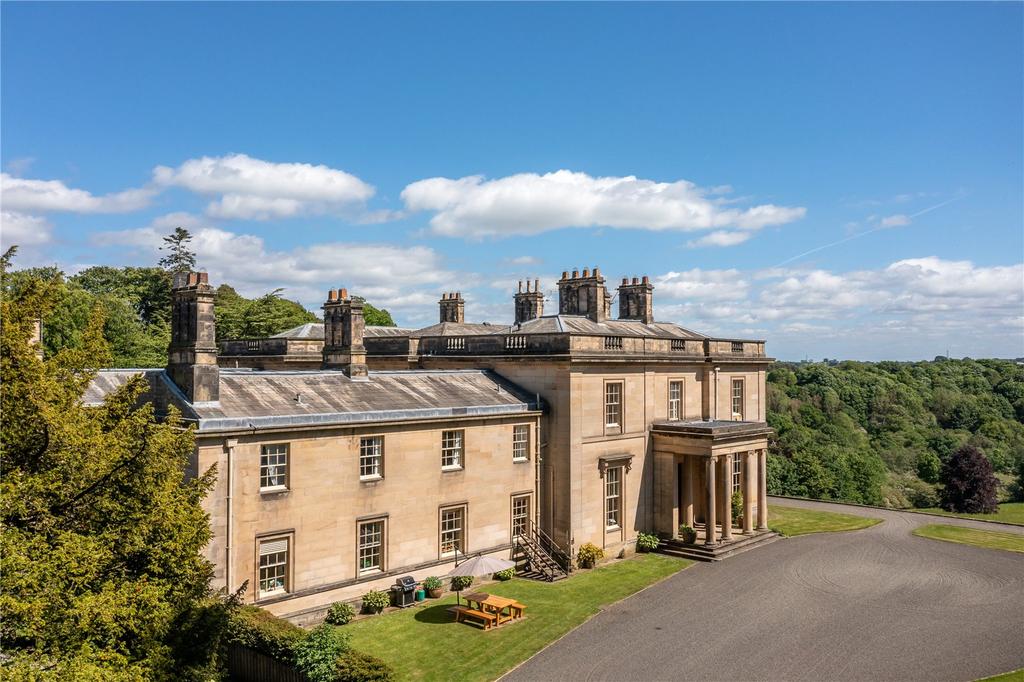 A large part of his estates, including Meldon Park, an enclosed deer park of 466 acres to the north and south of the river Wansbeck, was settled by the Crown as an endowment on Greenwich Hospital.

In 1832, the Greenwich Hospital Trust sold the 2,070-acre Meldon estate for £55,000 to Isaac Cookson, who ran his father’s glassmaking and chemical enterprises with considerable success. He was Mayor of Newcastle in 1809 and High Sheriff of Northumberland in 1838.

Having already worked with Dobson on an urban development project in Newcastle, Cookson lost no time in commissioning him to build a new country house on a ledge of a valley in the northern half of the former deer park that sweeps down to the River Wansbeck—a site chosen by the architect after months of walking the land. 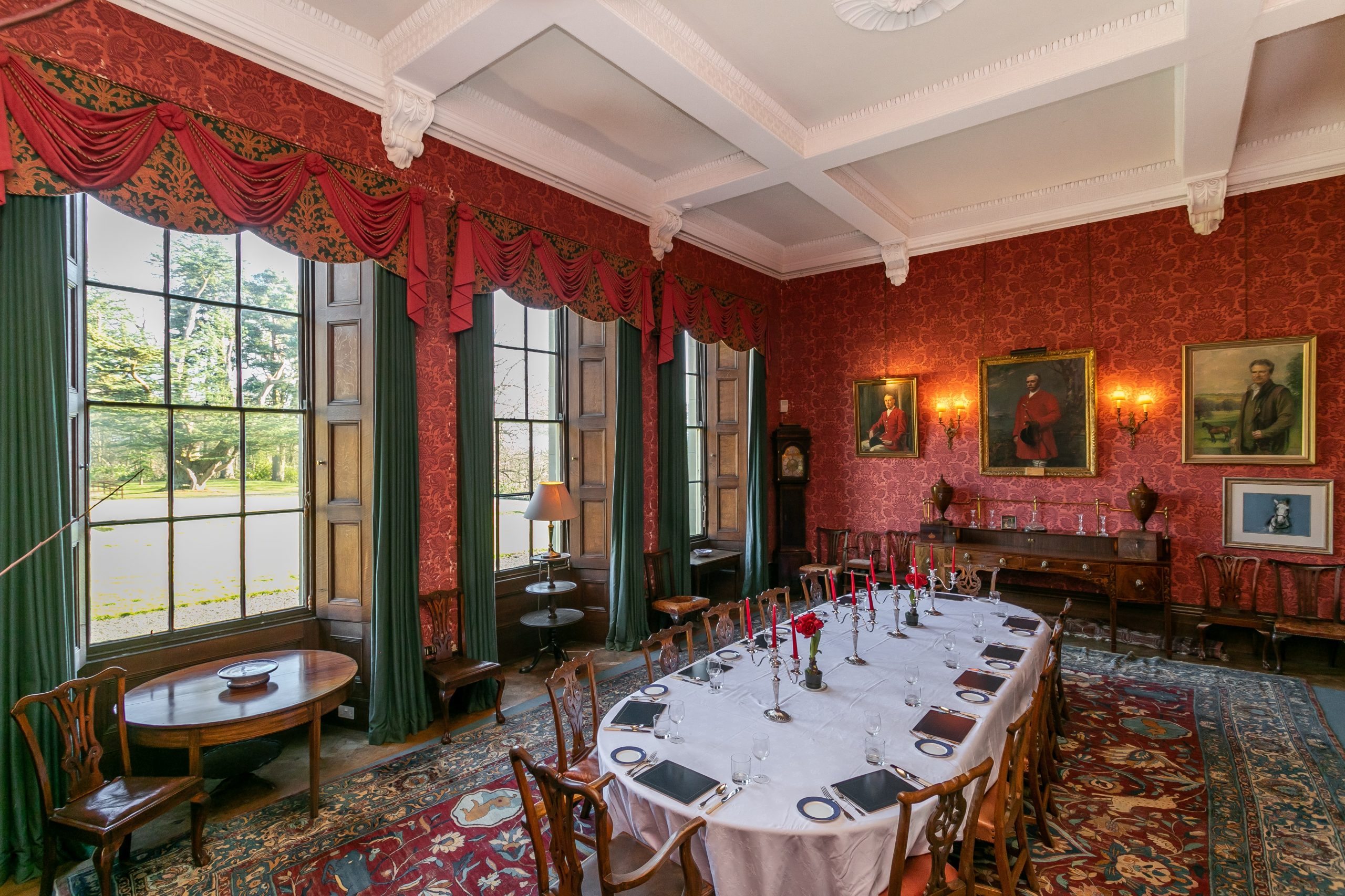 For Dr Girouard, the end result was ‘a straightforward, sensible house, beautifully built and in a beautiful setting. Its architectural detail is simple but elegant, its rooms are comparatively few, but very spacious. Indeed, a criticism that could be made of it is that they are too spacious; their high ceilings and generous proportions, both upstairs and down, are not altogether well adapted to a Northumbrian winter’. That, of course, was in 1966; since then, much has been improved and updated.

Meldon Park is built on a convenient plan adopted by Dobson for at least four of his houses. The main block is roughly square, with the entrance on the west and a central bay window on the south. A large service wing (much reduced in 1962) stretches out to the north, with a conservatory wing at right angles to the west. 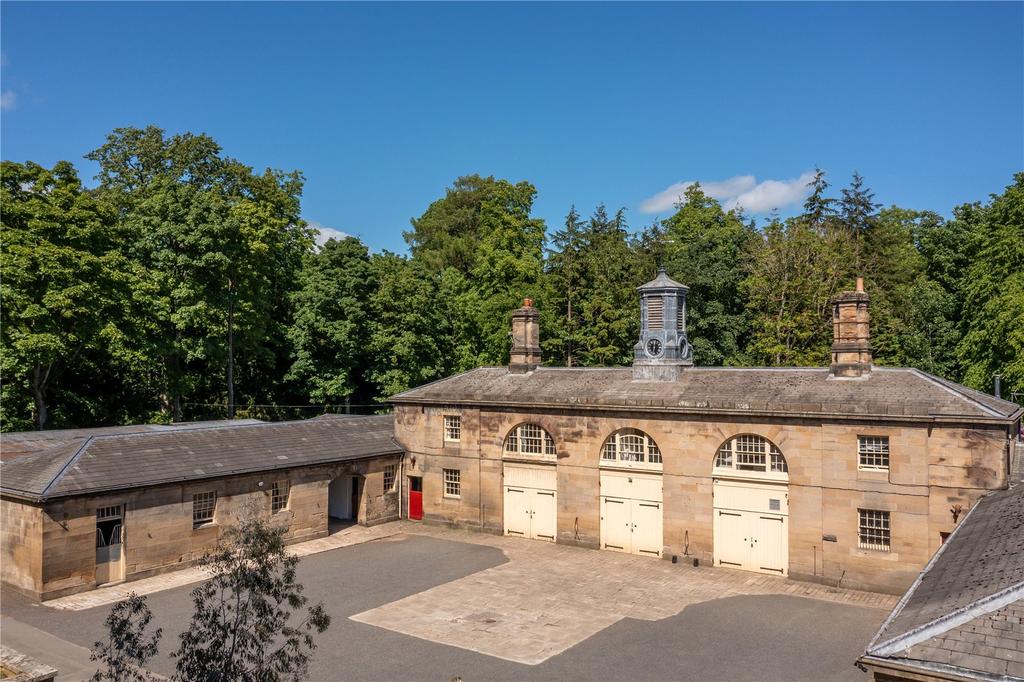 The principal reception rooms run along two sides of the main block—a library and two drawing rooms to the south, a dining room to the east. The entrance hall on the west side leads into a vast staircase hall, ‘the size of one in a London club’, according to Pevsner. Dobson’s estimates for the construction, dated June 26, 1832, came to £7,188 1s.11d (not including the stables) and even allowing for the purchasing power of the pound in those days, the sum is still a modest one.

The heart of Meldon Park has always been the main estate house, which has seen extensive improvements since 1930, when Sir Edwin Lutyens replaced the original metal balustrades on the main staircase with the present mahogany ones and added the decorative plaster panels.

Dry rot was removed and a new roof fitted in the 1980s, when the east wing was converted into two separate apartments. The billiard room and orangery were also re-roofed in the 1980s, and a new oil-fired heating system was installed. 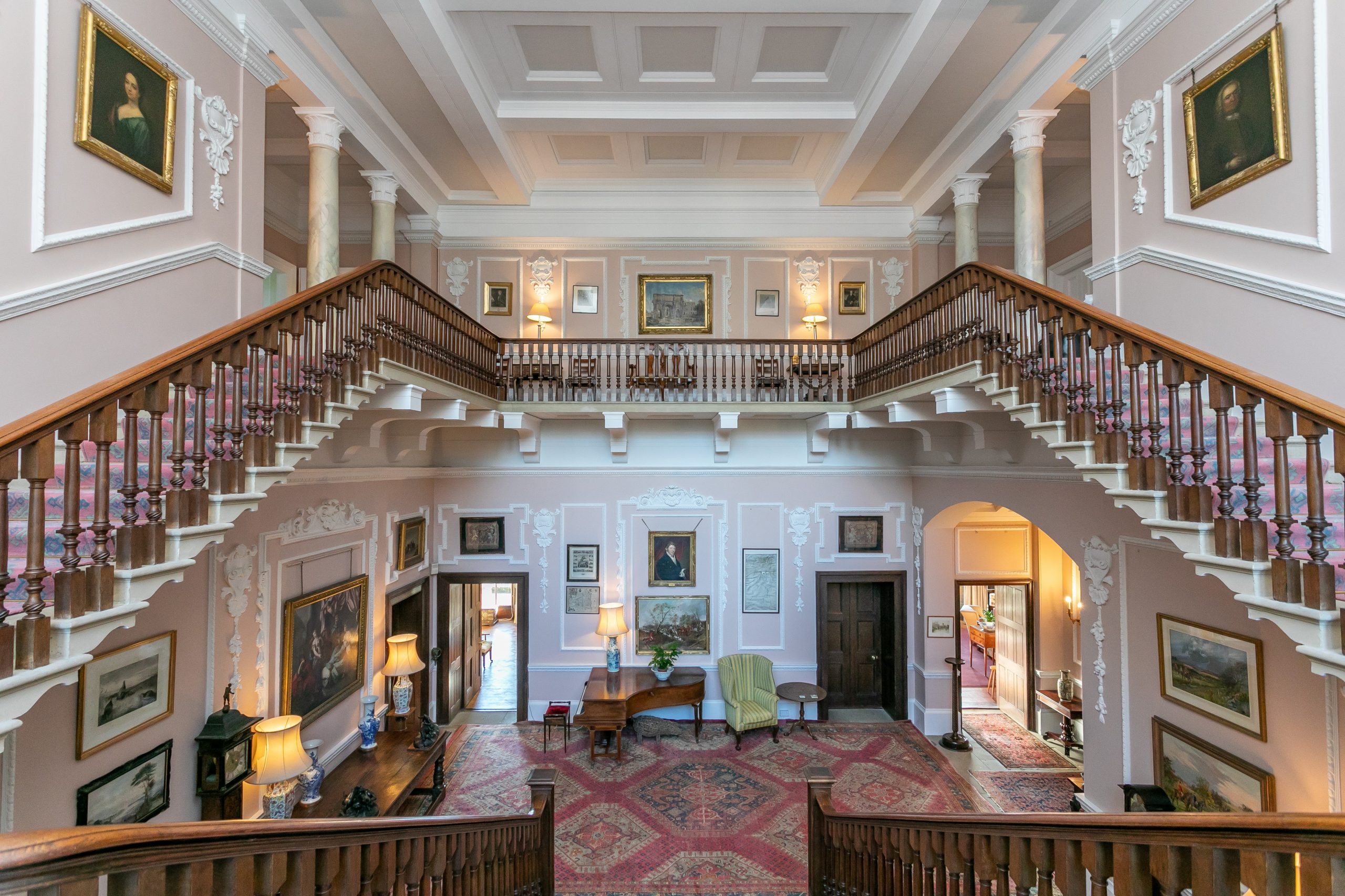 The astronomical cost of heating the house with oil eventually led to the recent fitting of a biomass boiler, fed with timber from the estate—a far more sustainable way to heat the hall and its surrounding properties, as James Cookson, Meldon Park’s present custodian, sagely observes.

For Mr Cookson and his wife, Emily, who moved to Meldon Park at the height of the foot-and-mouth epidemic in 2001, the 14,000sq ft house, which has 10 bedrooms arranged over two floors, with further accommodation in the north wing, has been both a challenge and a wonderful family home. Central to the family’s enjoyment of the estate has been Dobson’s listed stable block—one of few still used for its original purpose—and the running of the Morpeth Hunt, founded in 1818 by the Cooksons, who have since provided many of its masters. 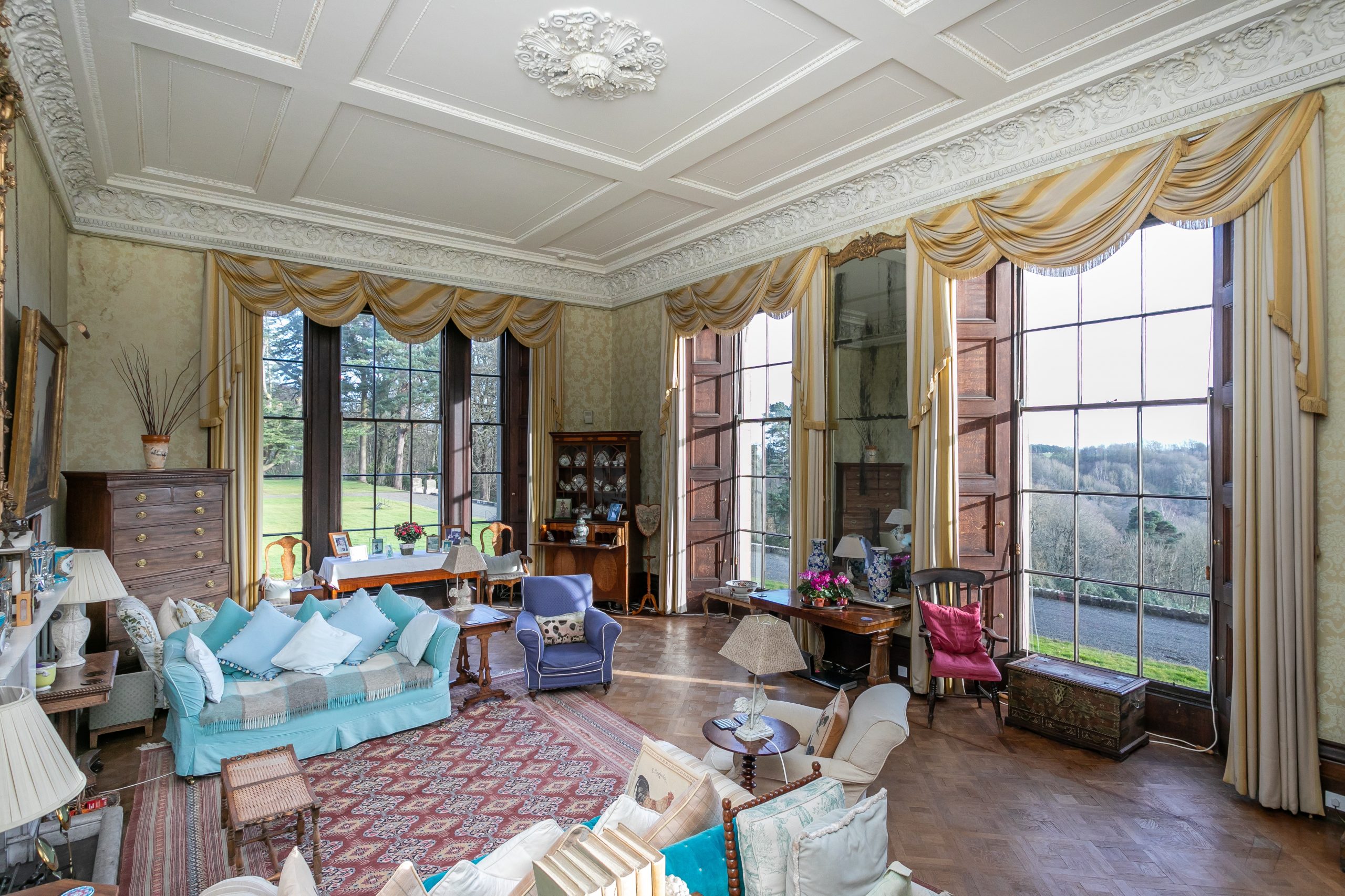 For Mr and Mrs Cookson, the decision to sell has been an agonising one—and one about which they have thought about long and hard. ‘It’s been a battle between head and heart and, in the end, the head came out on top,’ Mr Cookson admits, as he continues to preside over the dynamic community that is the wider Meldon Park estate. 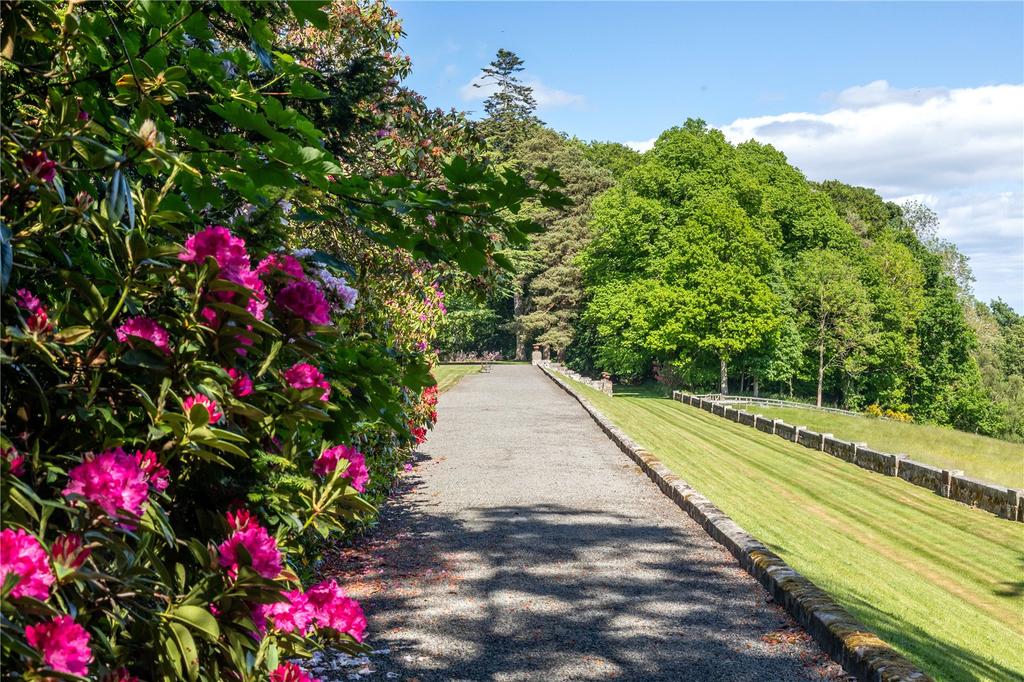 Meldon Park is currently on the market via Savills with a guide price of £3.5 million — see more pictures or enquire with the agent for further details.

Morpeth: What you need to know

Location: Approximately 16 miles north of Newcastle and about 8 miles inland from the coast.

Atmosphere: The bustling historic market town is a wonderful mix of old and new, with cobbled streets and farmers’ markets that meet with an excellent retail, restaurant and bar scene.

Things to do: Northumberland is home to more castles than any other county in England, with Morpeth Castle located nearby and many others easily accessible. Visit Carlisle Park, or explore the towns cobbled streets. There are several golf clubs in the area as well as lovely walks to enjoy.

See more property for sale in the area.

Catch up on the best country houses for sale this week that have come to the market via Country Life.