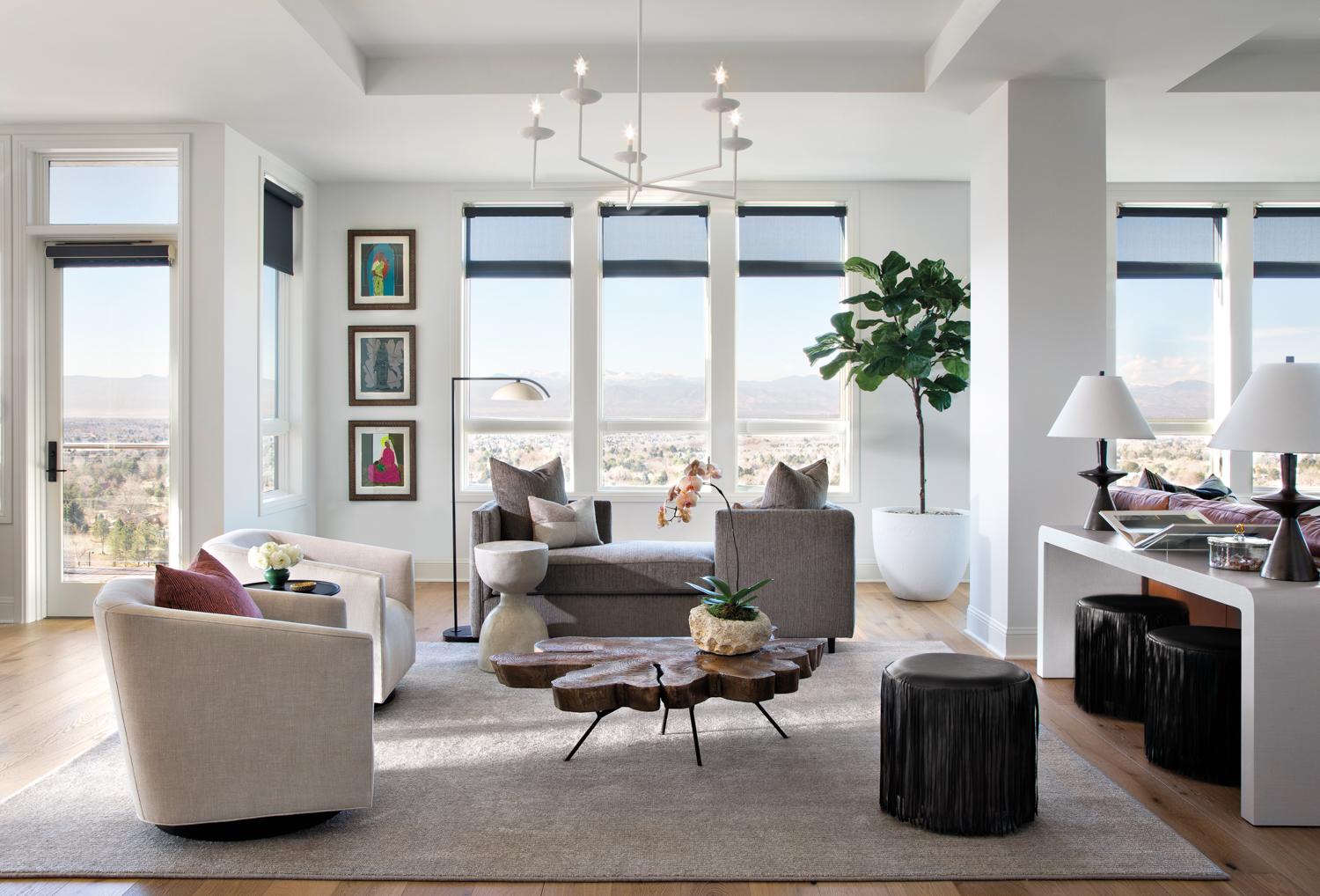 With dramatic mountain views, ample space and an array of amenities, one double-unit condo at The Landmark in Greenwood Village offered everything its homeowners desired—the only catch being an awkward layout with dated interiors. After living in the home for a few years, it eventually became evident: They needed to move some walls. The couple turned to designer Kate Jung, architect Tammy Terhaar and builder Justin Esmael for what would prove to be a complex project.

Reconfiguring the floor plan was a creative challenge from the get-go. “Because it’s an existing building, we had structural limits. For example, you can’t move much of the plumbing,” Terhaar explains. “Our hands were a bit tied, but ultimately they got what they wanted.” And what their clients desired was no short task list. They asked for an overall reconfiguration of the kitchen, a renovation of the primary bedroom closet and bathroom, as well as the creation of an en suite bathroom for a second bedroom. Rethinking the access to the laundry room, adding a powder room and fitting a guest area into the study completed the plan. “Roughly 75 percent of the unit was gutted,” recalls Esmael. Terhaar kept another item top of mind as she reimagined its flow: “The tremendous views are the focal point,” she says, pointing out the high rise’s unobstructed sight lines of the western range. “Changes I made couldn’t detract from that open and spacious feel.”

While Terhaar and Esmael recast the layout, Jung focused on updating the abode’s Tuscan-style interiors, which, she explains, leaned a tad stuffy. “My clients lived in Texas and California before moving to Colorado,” she notes, “and their style reflects their roots. They wanted clean, modern lines, warm textures and patterns that feel edgy but are grounded in Southwestern styling.”

Jung deliberately kept the decor spare—“so the views are the first thing you notice,” she says—without shying away from color or materials. To create a stronger sense of intimacy, larger rooms required definition. In the long living area, for instance, Jung utilized the same rug to anchor both a conversational cocktail space and one dedicated to television viewing; she also hung the same custom chandelier over both seating arrangements. “In open plans, each ‘sister room’ needs to speak to the other,” she says. “Carrying over a hue or texture leads the eye through a space, making it feel cohesive.” Modern elements mix easily with antiques, particularly in the entry, where an assemblage of contemporary furnishings is softened by the juxtaposition of a vintage Turkish rug.

Carefully curating each area to fit the Southwestern aesthetic her clients sought, Jung worked in much of their existing furniture and art. “Using pieces they already own makes it feel like home,” she notes. A few items that she selected are the primary bedroom’s petite hair-on-hide chairs and the artwork flanking the room’s fireplace. Atop its Venetian plaster surround lies another of the couple’s pieces: a narrow wooden trundle. Placed prominently on the mantel, it’s filled with the wife’s collection of heart-shaped rocks (which, coincidentally, Jung also collects).

The kitchen, a centerpiece of the remodel, received the lion’s share of attention from the entire team. And its completion bordered on dramatic. Terhaar, for her part, rejiggered the original two-island layout, a set up that formerly created awkward “choke points” to the flow of traffic in the room. As a solution, one island was removed and the other enlarged. Jung contributed warm finishes—pale greige for the cabinets and mellow gray quartzite for the counters—creating an atmosphere that feels modern but not stark. The design scheme was applauded by all… until it was deduced that the building’s freight elevator was too small to accommodate the new slab. Lifting the stone by crane through the outdoor terrace became the scariest moment of the project, Esmael recounts. “We had a slab going ten stories up past glass balcony panels, on a really windy day—it was terrifying,” he says. It made it over the railing but glanced off the door, chipping off a 10-inch chunk. Luckily, the team’s concern was short-lived. “YK Stone Center sent out a ninja repair guy and now it’s impossible to tell anything ever happened,” Jung shares with a laugh. “But even considering this dramatic event, my clients would choose this path again.”

Yet, after all the major changes within this home, the views of evergreen trees and snow-capped mountains still steal the show. “When you walk in, they take your breath away,” Jung says. Terhaar concurs, adding, “overall, we just simplified the internal elements so that the surroundings could shine. And they really, really do.”