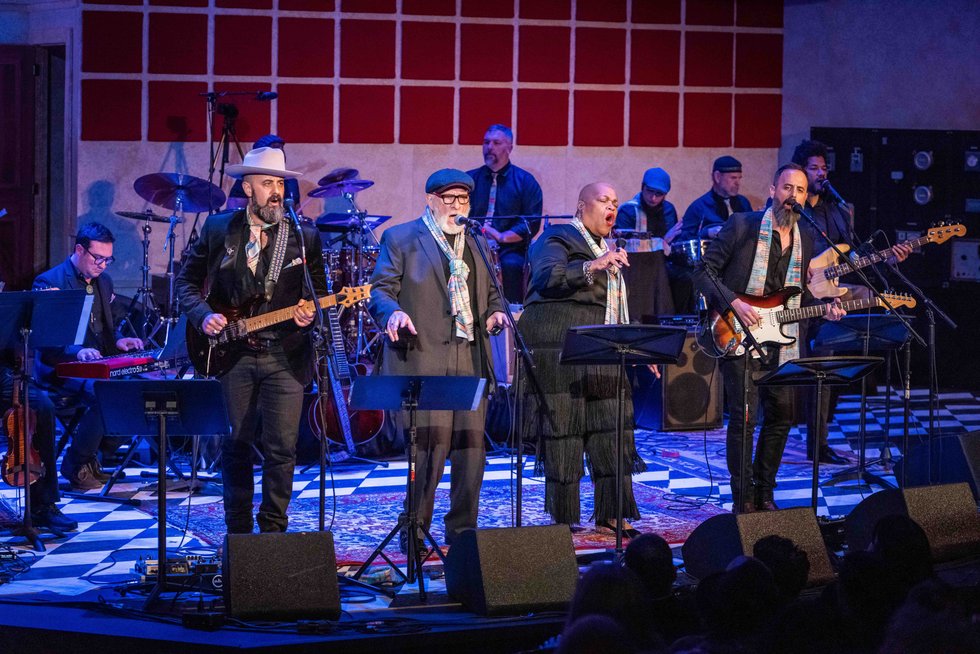 Rabbi James Stone Goodman enjoys poetry, and he had a poetry teacher whose last advice to him was, “invent your own form.” At the time, he did not understand what she meant, but now, as he works on the 12th Annual Brothers Lazarhoff Hanukkah Hullabaloo, he gets it.

The Hanukkah Hullabaloo is an annual event hosted by the Brothers Lazaroff—a local Jewish band that plays music ranging from rock to jazz. David Lazaroff explains that the Hullabaloo started when the musician Kinky Friedman came to St. Louis on his tour, and Brothers Lazaroff asked to open for him at Off Broadway.

The venue’s owner, Steve Pohlam, explained that Friedman was playing solo, and the band could perform after him. Like the brothers, Friedman is Jewish, and his tour was during Hanukkah.

“There were all these bands doing rock and roll Christmas parties, and nobody’s doing a Hanukkah party,” Lazaroff says. “So, we started it, and the first year was pretty fun.”

Since then, the brothers have hosted the event each year, and for its latest iteration, the Lazaroffs are headed to The Grandel. The December 3 performance will include time-honored favorites, including Goodman and the Eight Nights Orchestra’s spoken-word piece, “Eight Nights.” Lazaroff asked Goodman if he would read poetry at the event for the first year, and he has returned every year since.

“[The first year,] we got on stage, and the performance was so hot,” Goodman recalls. “The room was electrified by what we did.” Lazaroff says the poetry has become the centerpiece of the show, with each poem in the series teaching a different lesson with a different meaning.

This year, in addition to Brothers Lazaroff and Goodman, DJ Boogieman will play throughout the evening, and vocalist Anita Jackson will sing at the event. Latkes—Jewish potato pancakes—will be made on stage, and all proceeds from the event will go towards the Jewish Community Centre of Krakow in Poland, which is taking in Ukrainian refugees.

“For the last eight months, they’ve been housing, feeding, clothing Ukrainian refugees, and we wanted to do something direct,” Lazaroff says. “Our roots are from that area outside of Kyiv. There’s a lot of Russian descendants in the band.”

Lazaroff is anticipating about 600 attendees at this year’s Hanukkah Hullabaloo. It’s a far cry from their early celebrations.

“In our first year, there were probably about 75 to 100 people there,” he recalls. “And then, the next year, we sold out Off Broadway, which was like over 300 people.”

While the annual event celebrates Hanukkah, Lazaroff and Goodman say not everyone in the audience is Jewish. In fact, about half the people who attend are not. The event also honors musicians who have died in the past year, whether or not they are Jewish, and Lazaroff says it’s a “celebration of music.”

This year, both Lazaroff and Goodman are looking forward to performing again, especially in front of a crowd larger than what they saw during the COVID-19 pandemic.

“There’s a tremendous delight in coming back in any form at all,” Goodman says.  “We’ve been shut down for a while, and we feel like we’re inching our way back.”

Lazaroff also says it’s nice to reunite with all the musicians who help with the show, even if they see each other year-round.

The Brothers Lazaroff Hanukkah Hullabaloo is December 3 at The Grandel. Doors at 6 p.m., show at 7 p.m. Tickets are available at MetroTix.com