To some observant passersby, the intriguing timber house with subtle Asian influences perched on a wooded property outside of Asheville, North Carolina, is referred to as the “Japanese house.” To others who are lucky enough to get a glimpse inside the home, it’s the “ninja” or “chess” house. But its official moniker is Kotanaru Kyūden, which translates from Japanese to English as “Palace of the Different One.”

The “different one” in question is Dylan Topol, the homeowner who had dreamed of the unusual abode long before it finally began to take shape. A fortuitous encounter with architect Ken Wertheim, an independent Timberpeg representative, at an area home show helped put the plan into action. “A few months after we met, I got a call from Dylan’s mother, who helped him through the process, and she said, ‘I think you might be the one person who could pull this off for him,’” says Ken.

Ken’s first meeting with Dylan clued him in that this would be a project unlike any he had ever worked on in his 35-year-long career. “He always greeted me wearing traditional Japanese attire — a kimono and sandals — and we would start our meetings with a cup of tea,” Ken recalls. The two soon discovered a shared love of chess and added a game to their pre-meeting rituals. “Only then would we get into an actual conversation about the design,” explains Ken.

It quickly became clear that elements of Japanese architecture and culture would be the home’s guiding philosophy, making it especially fitting that timber framing would factor in. “The Japanese have had timber frame homes for thousands of years. In fact, they say they used the building practice first,” Ken notes. 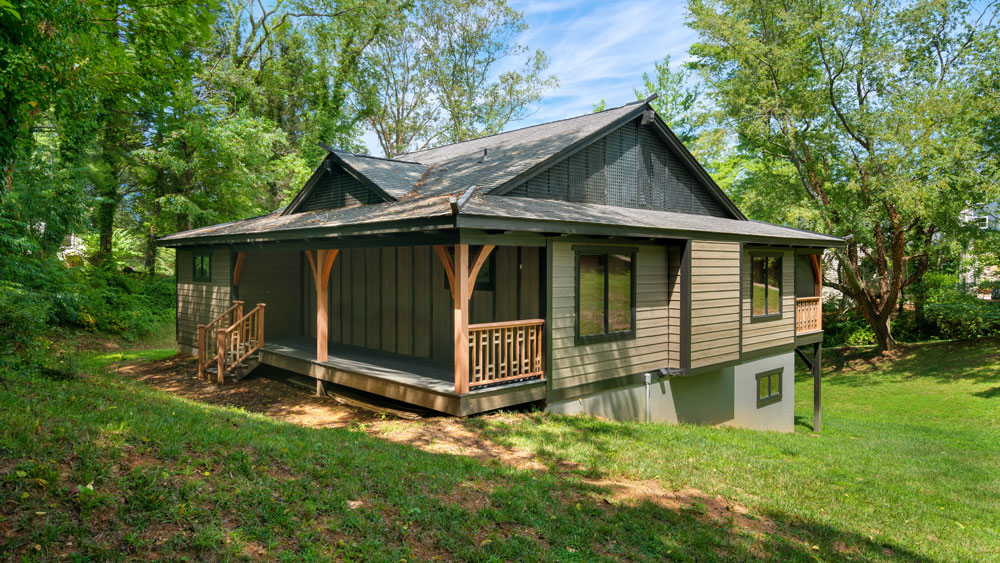 Though a full timber frame wasn’t in the budget, a hybrid design anchored by a voluminous timber-framed great room with traditional stick-frame construction elsewhere fit the bill. The great room — a two-story space outfitted with simple straw mats — serves as a tatami room, a traditionally open area with minimal furnishings. The rest of the primary rooms, which include a kitchen/dining area, a master bedroom, a study and a guest suite, surround the central living room core. From the great room, sliding doors lead to a sanctuary and pergola-topped meditation deck.

While the streamlined spaces and furnishings of the main level remain true to Japanese interior design, the 1,400-square-foot area is far from simplistic. But you’ll have to look closely to discover the nuanced elements, each one a marriage of Dylan’s appreciation of Eastern culture and love for good old-fashioned fun. “Maturity and playfulness have to be balanced; it’s a juggling act,” Dylan says, “so, the character of the house is Japanese-slash-ninja. Ninja actually means ‘misdirection,’ so there are playful things hidden everywhere.”

Some of these hidden treasures can be discovered before you step inside the house. Take the front door, for starters. Concealed behind the home’s cement-fiber siding, it’s completely imperceptible. Even the doorbell is located 15 feet away to throw visitors off. “Remember: It’s all about illusion here,” says the intrepid homeowner. “I want you constantly asking, ‘What is real? What isn’t real?’”

Once you do find your way inside, the surprises continue. To the immediate left, a seemingly built-in bookshelf filled with Dylan’s favorite readers and chess sets glides to reveal a concealed staircase. But don’t go down the rabbit hole just yet. There are still tons of features to discover on the main floor, from the oversized clock in the living room with removable shuriken (throwing star) “numbers” that Dylan often hides for his youngest visitors (usually his nieces and nephews), to the revolving “ninja” door in the master bedroom that allows someone to vanish behind the wall almost imperceptibly to two additional lower-level access points — a concealed drop-down ladder in the kitchen island and a moving wall that reveals an indoor slide. 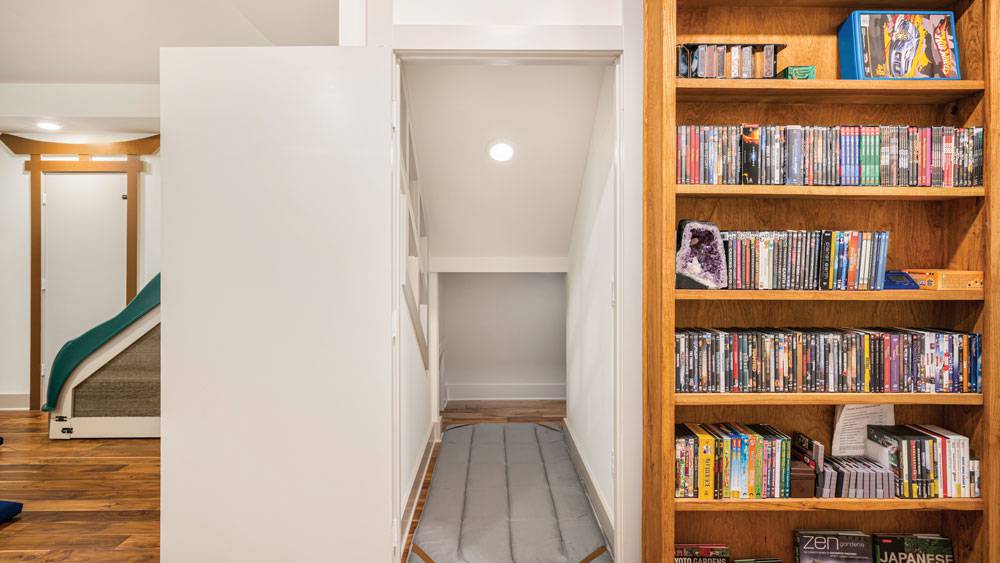 The lower level is where the fun takes a no-holds-barred-approach. “He calls the space his ‘Funatory,’ a combination of ‘fun’ and ‘laboratory,’” explains Ken. “He would come up with these cool ideas, then I would generate the drawings and make sure things would meet code.” Dylan admits the space is where all of his wildest design dreams came to life: “It’s where all my crazy ideas go. A hidden passageway to a secret tearoom? Yes! A slide to access the space with a storage space for the television and game consoles hidden in the frame? Yes!” Add in a “door to nowhere” that appears to be a tunnel but is, in fact, a blank wall, a life-sized chess set, and a secret room under the staircase filled with cozy pillows, and you get the picture.

But not all of the lower-level elements are whimsical. The space also includes an exercise room, a gemology lab and a luxurious, spa-like bathroom with an ofuro (Japanese-style soaking tub) and Watersense fixtures that point to Dylan’s awareness and commitment to eco-friendly living.

“From top to bottom, everything in the house is as energy and water efficient as humanly possible,” Dylan says proudly. “All of the shower heads, tubs, faucets and toilets in the house use Watersense technology, and every light bulb in the house is LED.”

Throughout the home, materials were often given a second life to avoid waste. “In fact, according to Timberpeg … to their knowledge no other house has as much rescued and upcycled material as mine does,” says Dylan. Just outside the home, solar panels power 80 to 90 percent of the home’s energy usage, and a rainwater collection system conserves water.

Ultimately, this collision of adult-appropriate themes with childlike, whimsical touches is what this home is all about.

“The mind and body get stagnant in a house that’s predictable,” declares Dylan. “But it’s impossible to be bored here. This house is a crazy hodge-podge of environmental responsibility, respect for the space around me, architectural maturity and playful elements.”