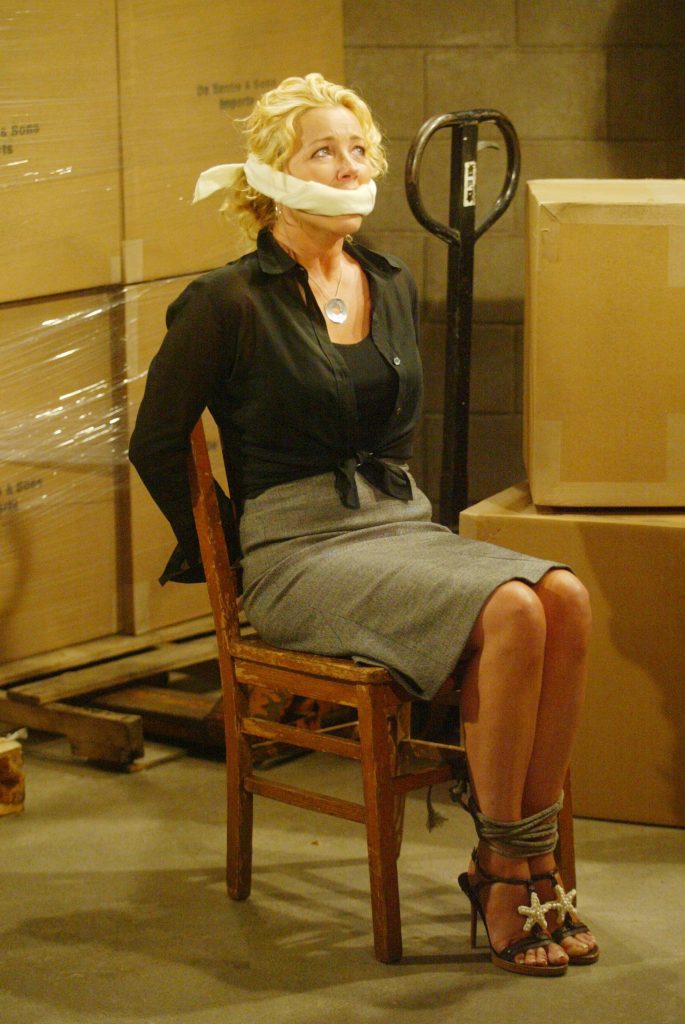 What Is Your Favorite Memory About Your First Day At Y&R? “My start at Y&R was such a whirlwind. I was an emergency recast and the process happened very quickly. The show was only 30 minutes back then, so we shot it as if it was live, but on tape. I have such fond memories of those times and of forming relationships with some of the cast and crew that have lasted a lifetime.”

Favorite Storylines? “At the top of the list would always be, not a specific storyline, but the continuing epic story of Victor/Nikki. Their initial courtship was so lush and romantic; Y&R’s version of My Fair Lady, crafted by our brilliant [Co-Creator/then-Head Writer] William J. Bell. How fortunate I am to be part of one of the most popular and enduring pairings of not just Y&R but all of daytime. It is indeed a blessing. Going way back, I loved the storyline with Crazy Edward, where I eventually discovered the shrine he had for his dead mother on his fireplace mantel! It was so spooky and dark, which I love. And Paul Tulley, who played Edward, was such a phenomenal actor. Another story that I must mention is Nikki’s alcoholism. I’ve always appreciated the complicated layers that Nikki’s drinking gave her. As well as her loved ones. After all these years, this topic is being featured again, though not in the way you might think. I’m enjoying it immensely and am so grateful that the writers are using her history to tackle this very important current storyline. Everything old is new again.”

Favorite Line Of Dialogue? “Oh, my God! Line of dialogue?! That’s even harder than picking a favorite storyline! Oddly enough, the only thing that comes to mind is a line that I ad-libbed! It was many years ago and I couldn’t tell you what the scene was about. It occurred at the very end of a scene with Peter Bergman [Jack]. He had a line that indicated that he was miffed about a business competitor’s success and instead of saying the line that was scripted, I said, ‘Careful, Jack. Your schadenfreude is showing.’ There were a few moments of absolute silence on the soundstage, finally broken by our dear friend, the late boom operator Luis Godinez, who said into his mic to the control booth, ‘What? What did she say?!’ I remember wondering if they would let my comment go out on the air, so I made sure to watch that air show. Sure enough, the schadenfreude line stayed in!”

Favorite Scene? “I seem to like very dramatic, high-stakes scenes. Being kidnapped, held hostage, being stalked, etc. I guess I’m an adrenaline junkie! Though these high-drama situations aren’t necessarily rooted in reality, I find them to be extremely satisfying to play. I also love when Nikki and Victor have an emotionally charged fight. They are very passionate whether they are loving each other or fighting with each other!”

Favorite Offbeat Or Comical Scene? “While the rivalry between Nikki and Sharon can be very intense, our fight scenes are always so much fun to shoot! I particularly enjoyed our fight in the Newman stables, where our director, Mike Denney, pretty much let us do whatever we wanted! And who could have guessed that when Sharon talked Nikki into accompanying her down into the Genoa City sewers — complete with live rats! — so many years ago, it would create the complicated relationship between two such opposite characters?” 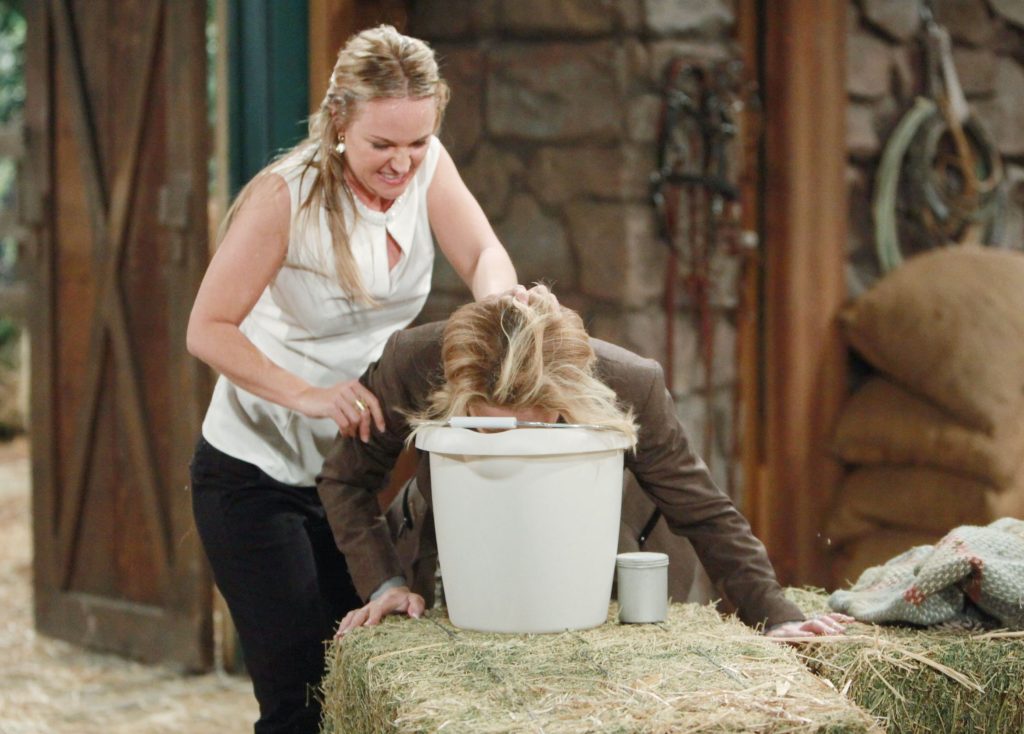 Favorite On-Air Romantic Rival? “When the show re-aired some classic episodes last year, one of them contained a very macabre set of scenes where Nikki sits up in a coffin to show Victor that she is indeed alive and still in love with him. (Okay, so it was Nikki’s fantasy, where anything goes!) A big part of the success of those scenes was the amazing Eileen Davidson [Ashley]. She was so spectacular, at once charming and sweet to Victor, then downright nasty regarding her nemesis, Nikki. One never needs reminding as to how talented Eileen is, but seeing those scenes again after all these years sent chills up my spine. Hands down, Ashley has been Nikki’s most serious romantic rival on the show, though there have been many over the years.” 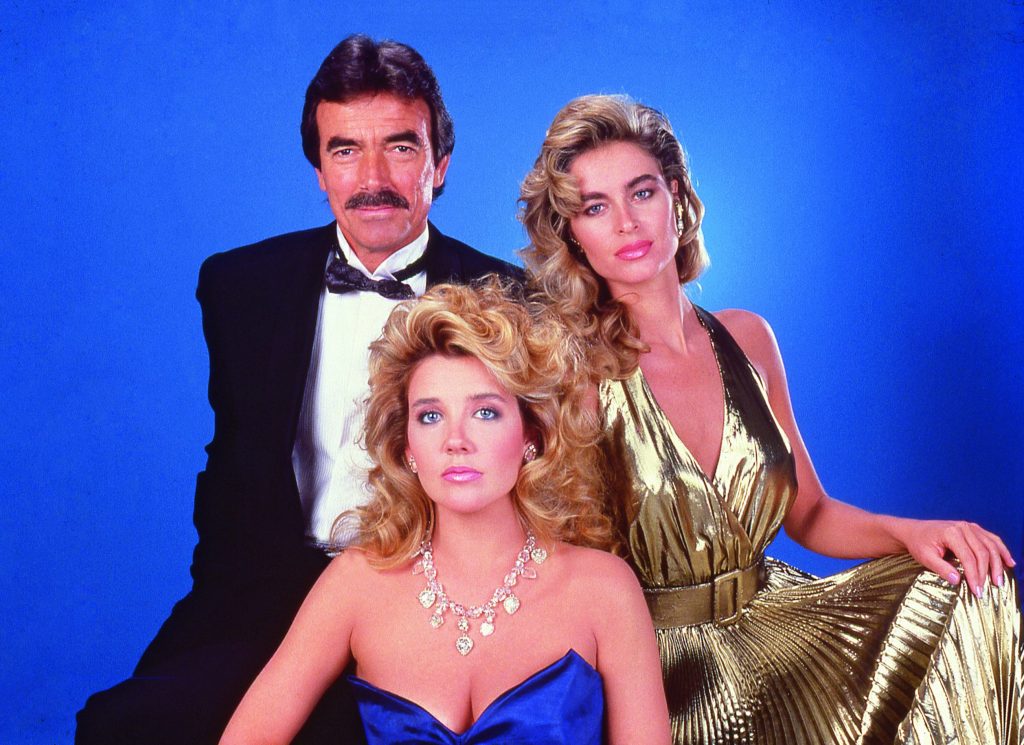 Favorite Thing About Working With Eric Braeden (Victor)? “This is the question I am asked most often. The short answer is: Our souls love to dance together! Our chemistry is effortless and a gift from the acting gods. The long answer is: There is no way to simply describe a working relationship that has lasted over 40 years. My bond with Eric is everlasting. I look back at the important role he has played in my Y&R experience with such fondness and gratitude.”

Favorite Thing About Playing Nikki? “Playing Nikki changed my life in ways I could never have imagined. She and Y&R have given me a home and a second family for 42 years, and the opportunity to do what I love on a regular, consistent basis, which is an actor’s dream.”

Favorite Thing About Working With Joshua Morrow (Nick)? “I remember when he first joined the show. He was just 20 years old and still living at home. Such a baby! He is now a husband, a father and such an integral part of Y&R. I’ve loved him since that first day. I’m so proud of the work he has done on the show and the man he has become.”

Favorite Thing About Working With Amelia Heinle (Victoria)? “I fell in love with Amelia on her very first day of ‘being’ Victoria. I remember exactly where our set was standing on Stage 43. At the time, Victoria was living in Florence, Italy, and Victor and Nikki came to visit her. She radiates a warmth that is intoxicating, which quickly endeared her to her new Newman family. We’ve played mother and daughter for so long that it’s hard not to look at her as one of my real-life daughters.” 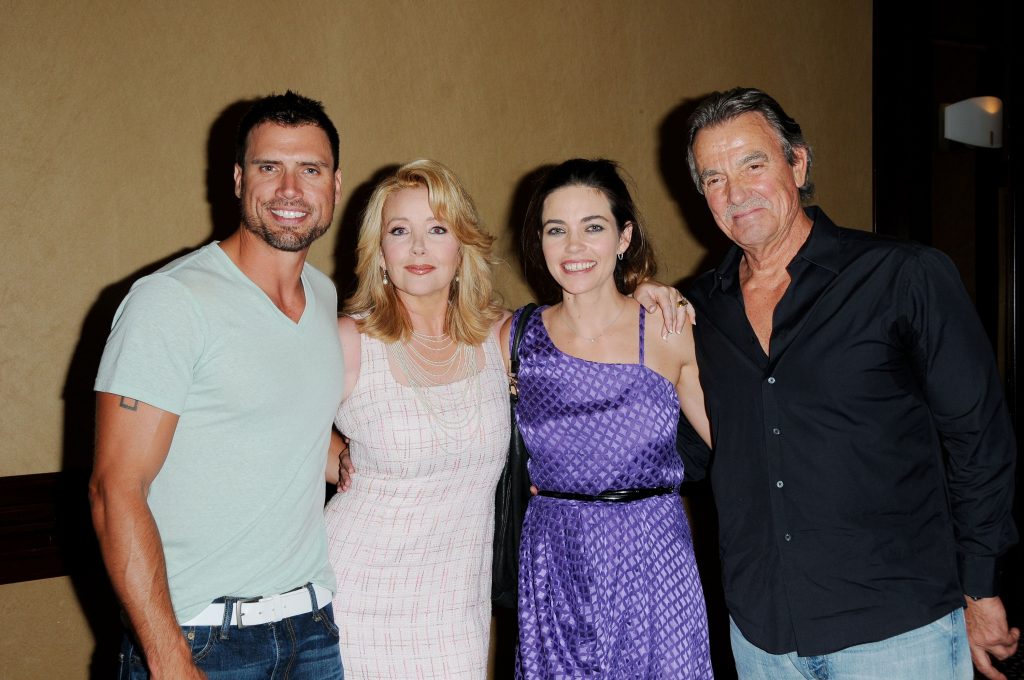 Favorite Thing About Working With Sharon Case (Sharon)? “Sharon is such a wonderful actress and is so committed to her work. She brings so much heart to both her role and the show. While Nikki often despises Sharon, Melody adores Sharon Case!”

Favorite Thing About Working With The Late Jeanne Cooper (ex-Katherine)? “Katherine was Nikki’s only dear friend. Part mentor, part mother figure, part contemporary. There was true love between them. Jeanne let her great love for Nikki flow through in every single scene they shared. Magical!” 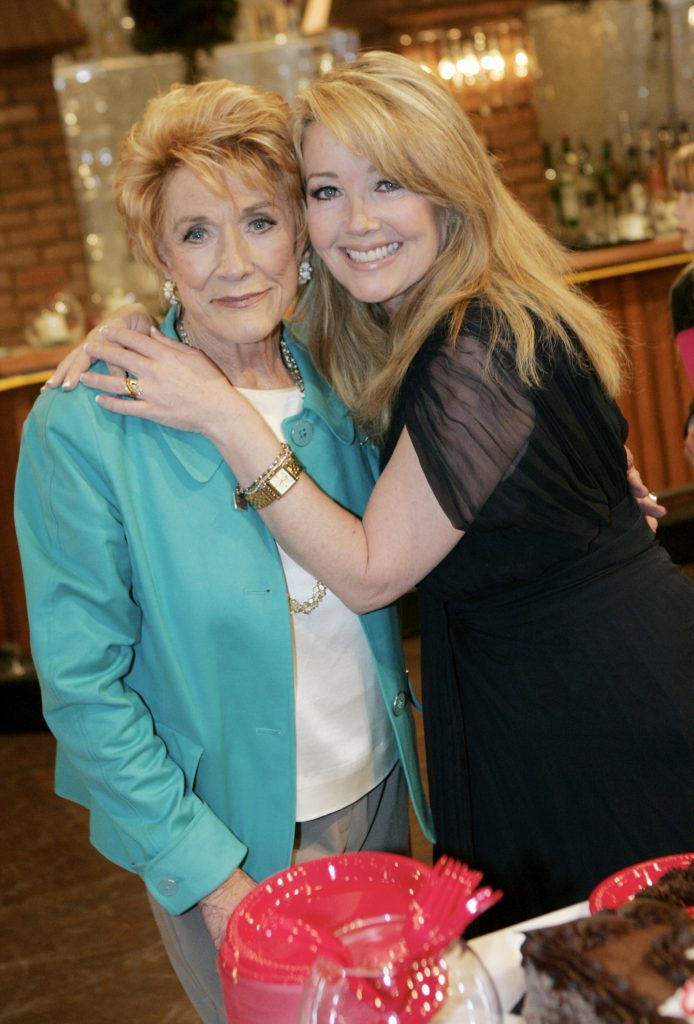 Favorite Celebrity Appearance On Y&R? “There have been so many! Going way back, I believe it was 1983, hockey great Wayne Gretzky played a witness to Nikki’s wedding to Tony DiSalvo! (Though I think it was later deemed null and void!) He is such a fan of Y&R and loved being a part of it.”

Favorite Past Scene Partner? “John Enos! Nikki and Bobby’s relationship was so dangerous … and unexpected. They came from similar backgrounds. Initially, Nikki was wary of him. But eventually she was able to let her guard down with Bobby, which helped to make those scenes so electric.” 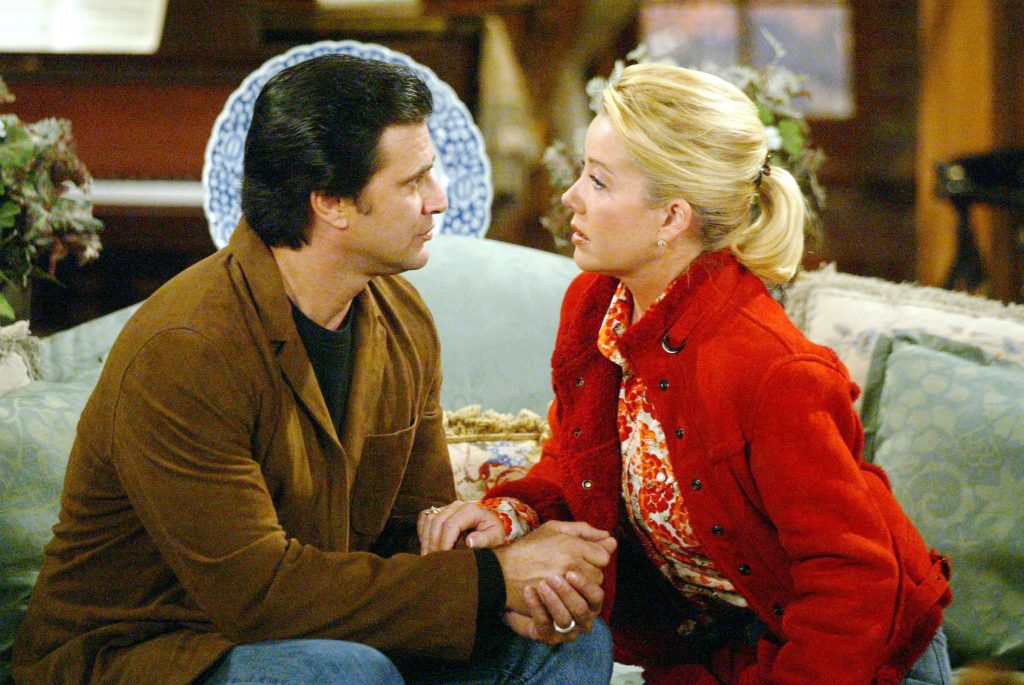 Favorite Thing About Playing Nikki As A Mother? “While I am nothing like Nikki, to repeat, nothing like Nikki, she and I have experienced motherhood at the same time, which is an interesting parallel. Nikki has certainly made some mistakes, but what we share in common is that we love our children dearly and would do anything for them.”

Favorite Thing About Playing Nikki As A Grandmother? “Nikki being a grandmother has allowed for some lovely scenes with Aly Lind [Faith] and Hunter King [Summer]. I have seen them both grow up into lovely young women and very talented actors. Growing up in the business, I am able to relate to their experience and provide guidance and support along the way.” 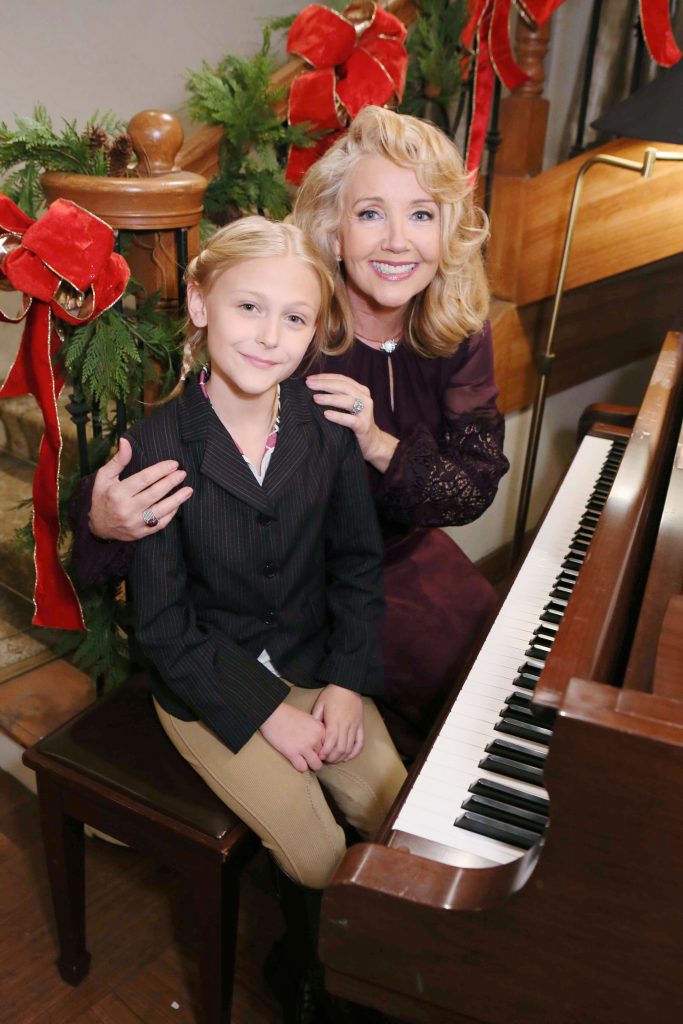 Favorite Fan Encounter? “As I shared in my memoir [Always Young and Restless: My Life On and Off America’s #1 Daytime Drama], my unexpected meeting with Aretha Franklin may not go down as my ‘favorite’, but it was certainly memorable. It taught me a very valuable lesson on the importance of being gracious to every fan, no matter how tired you may be. I have learned that you never know when a passionate Y&R fan is right around the corner! Or, right behind you at a newsstand!”